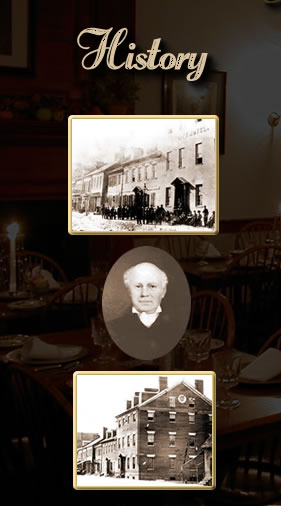 Founded as a seaport in 1749, Alexandria has always greeted visitors from near and far. Taverns, like Gadsby’s, provided travelers with much needed rest, food and drink, the latest news, a place to make business deals and to hold political discussions, and a variety of entertainment.

The site known as Gadsby’s Tavern consists of two buildings, a (circa) 1785 tavern & the 1792 City Hotel. Named after Englishman John Gadsby, an entrepreneur who leased the buildings & operated them as tavern keeper from 1796’s til 1808, the tavern & hotel were the center of Alexandria’s economic, political, & social life in the late-18th and early-19th centuries.

Threatened with demolition in the early-20th century, the buildings were saved & preserved by the American Legion, Post Twenty-four. Today, the City of Alexandria continues their preservation and interpretation through Gadsby’s Tavern Museum and by leasing the restaurant space to modern entrepreneurs. Your hosts and tavern keepers wish you an enjoyable meal and an enoyable historical experience at Gadsby’s Tavern.

Nearly all of the founders of American Independence enjoyed the warm tavern hospitality of Gadsby’s Tavern. No public building in America is more intimately associated with the struggle for independence and establishment of national sovereignty. For nearly a century, it was a center of political, social and cultural life in this important colonial seaport community.

John Gadsby, for whom it is named, gained international renown as the host of the tavern from 1796 to 1808.

The atmosphere of early America is found today in the famous Eighteenth Century hostelry, which was the setting for brilliant balls for society in the 1700’s, meeting of patriots and receptions for several Presidents of the United States. In their letters and journals, guests were universal in their praise for the lavishness of life at the tavern, which was described as the finest public house in America.

Drop Us a Line

Let us know if you have any questions!